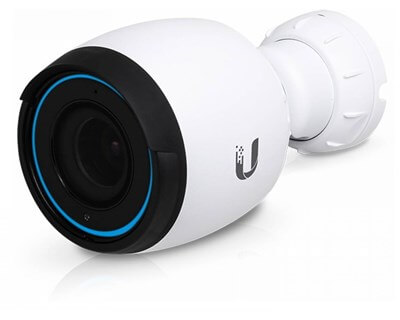 Ubiquiti Networks is a technology company that manufactures wireless data communication products. It has grown since its start in 2005 to include a wide selection of surveillance cameras. Ubiquiti’s UniFi system is a collection of network devices and a centrally-managed software controller. The system allows for easy access to all network devices so that a user can monitor and manage wherever needed. The software requires no additional licensing or support fee. It connects to a Cloud Dashboard where people can manage all servers and the status of locations from anywhere, any time.

Considered Ubiquiti’s top end camera solution, the G4 Pro provides users with 4K HD resolution and 3x motorized optical zoom. The camera also has high power infrared LED lights that improve night vision, as well as enhanced low-light sensitivity features. The G4 Pro’s design creates a weatherproof enclosure, making the camera fit for any location-- indoor or outdoor. A unique feature of the camera is it’s LED ring around the lens of the camera. This light draws attention to the camera and either deters the camera, or draws an intruder’s attention towards it so that the surveillance system can capture a clear image of that individual’s face.

Although intended primarily for indoor usage, the G3 Dome camera can also be used outdoors under an overhang and is a cheaper option than the G4 Pro. The camera can be mounted on any wall or ceiling-- both Ubiquiti camera setups are straightforward-- and features a wide angle lens that provides a user an extended field of view.

The G3 Flex is Ubiquiti’s most economical option for a surveillance camera system. Its compact size and camera’s design allows for easy mounting on any pole, wall, or ceiling. The G3 Flex has a wide-angle lens and high quality monitoring both in day and night. The camera includes both indoor and outdoor mounting options as well as a weatherproof design to withstand moderate conditions. Image settings including brightness, contrast, sharpness, saturation, and noise reduction, all of which can be adjusted by any use. The microphone is a selling feature of the camera, as not every surveillance system includes audio capabilities. Finally, a security system with G3 Flex cameras can support up to 50 cameras, allowing any business to scale up their surveillance.

The G3 Micro camera positions itself as a functional camera that can be mounted anywhere. The magnetic base supports the camera on nearly any surface, allowing for flexibility in placement. Even though the camera is about the size of a golf ball, it still has a good amount of power inside. The G3 Micro provides sharp images day and night, even in the darkest of lighting situations. Unlike other Ubiquiti cameras, this option features a two- way audio communication system accessible through the UniFi Video mobile applications.

Ubiquiti’s version of the bullet camera is fitted into a ball-joint mount that allows for flexible adjustment. The camera can be mounted indoors or outdoors and can easily be added to any existing network. Known for its resolution and great quality night vision due to an infrared range extender, the G3 Bullet is a great twist on the standard bullet surveillance camera.